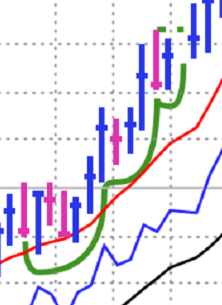 Ascending base is very rare. It occurs midway along a move up after a stock has run up at least 20% off an earlier base, marked by three 10-20% pullbacks with each low in price being higher than the preceding one. The base forming process usually lasts for 9-16 weeks, and the buy point or pivot point occurs when the stock price rises ＄0.1 higher than the high point from which the third pull back began. Note that the breakout should occur on an increased volume at least 40% larger than average.